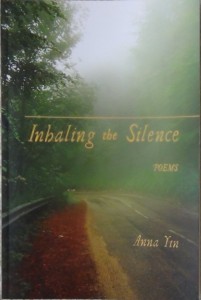 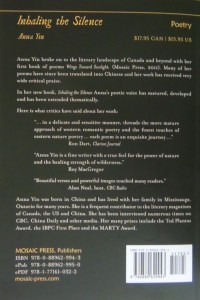 published on Clarion Journal in June 2013

Hannah Arendt, in her classic tome of political philosophy, The Human Condition, highlighted, in an acute way, how the West had given itself to a driven and hyper active existence (vita activa). Arendt rightly noted, that in doing so, we have lost the ability to heed, hear or, in Ann Yin’s recent poetic missive, Inhale the Silence. The erratic franticness of the West means that the vita contemplativa is often missing as a means of seeing and being. Anna Yin, to her challenging credit, has called, like Arendt, those who read her poetry to a more contemplative, meditative way of being. What is absorbed and internalized when the portals of silence are opened and the ancient message from such a place is inhaled?

Inhaling the Silence is divided into two illuminating sections: ‘Night Songs’ and ‘This Blue Planet’. ‘Night Songs’ has a definite soft romantic tone and texture—much is seen and felt, reported and recorded in allusive and illusive ways. The tender ambiguities of relationships between people and between the poet and nature are warmly and evocatively recounted and recorded. The listening and longing heart cannot be missed in many of the suggestive poems. The quiet hunger for a deeper unity of soul with soul, soul with nature, body to body cannot be missed. The larger vision from which Yin sees from is compactly summarized in “In the Mind of the Tao”. The songs of the night whisper hints of unrealized possibilities that yearn for more. The poet is more than aware, though, that such longings can, at times, seem to walk away from the hard realities of the human journey or go to places that can do harm and hurt to body and soul—“Talking to Frida Kahlo”, “A Christmas Wish—for Leonard Cohen” and “For Irving Layton” address such timeless and timely dilemmas. “Purple and Gold—In Memory of P.K. Page” sings hope and healing. Many of the poems in “Night Songs” light but do not land long on that which can be touched in the night season if there is but the inner silence to inhale deeply from such a sacred centre and place.  The merging of Oriental East and Occidental West is woven together on a delicate tapestry in “Night Songs” that cannot but charm and welcome the reader.

‘This Blue Planet’ is a fitting companion to ‘Night Songs’. The inner longings of ‘Night Songs’ give way to the dawn and day of ‘This Blue Planet’. There are cycles and seasons, and many of the poems in section two are more engaged with the painful human journey and the multiple injustices that exist on this blue planet. The sights seen and not flinched from are told in a telling and graphic manner. Poems such as “Visiting North Korea”, “Trip to Cuba”, “Visiting Ground Zero (2009)”, “Seeds of a Bailout” and “The Preference” journey into the painful places. “Why then do we not despair?—Anna Akhmatova” and “Finding Milton” point to paths through the dark and tragic places on the landscape. The fact that Anna has entered the painful political terrain in ‘The Blue Planet’ does mean that there is fullness in her emerging poetic vision that is most enticing and attractive—the best poets deal with the complex inner and outer journey and do so in probing and integrative ways—Anna Yin has done this and she is finer poet for living such a vocation.

Much is heard and spoken in Inhaling the Silence that is worthy of plenty of rereads. Anna has a receptive and meditative soul and what she has inhaled in the silence, she generously breaths back in life giving speech—this poetic missive is oxygen for the soul in an age when the contemplative approach to life is desperately needed as a corrective the addictive hyper-activism of many in the west in which many see but see little.

check it soon on Clarion Journal