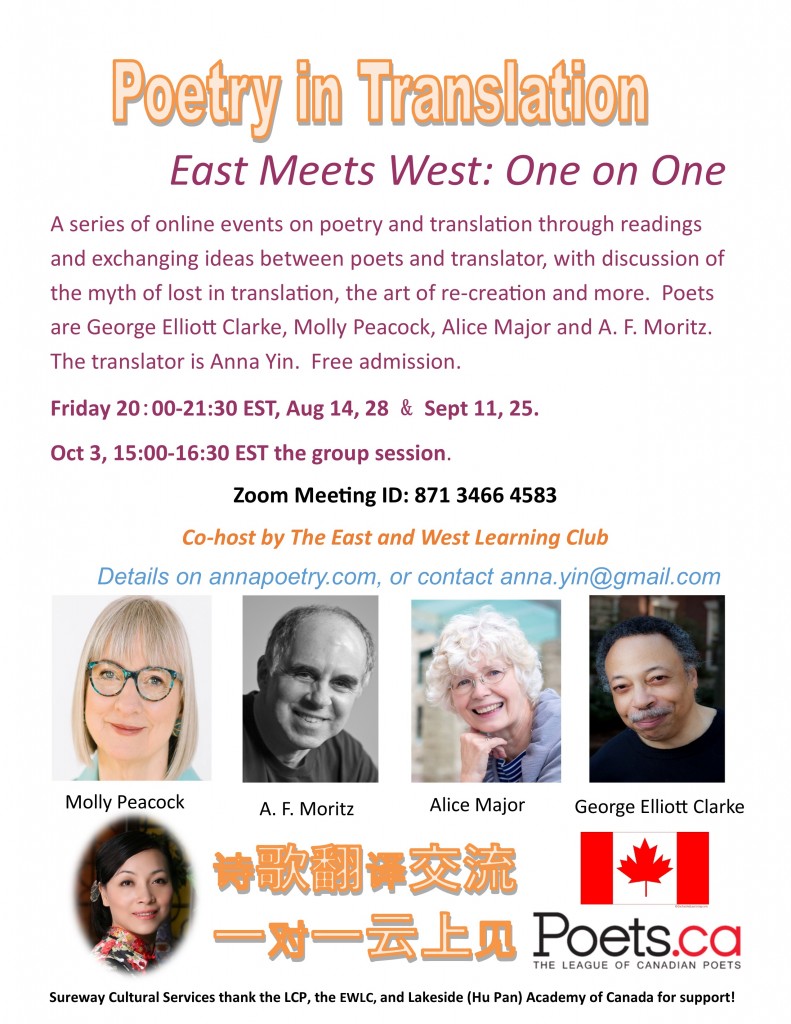 A series of online events focusing on poetry and translation by reading and discussing original poems then translations between the poets and the translator. We will talk about the myth of lost in translation, tackle the art of re-creation and exchange the mutual gain through the process.  The poets are George Elliott Clarke, Molly Peacock, Alice Major and A. F. Moritz, and the translator is Anna Yin

Each session will last 90 minutes and will involve one English-language poet and the Chinese translator to discuss techniques and adaptability required and close-reading poems of different styles and subjects.

These events aim to engage the audience and stimulate wider and stronger interest and conversation for cross-cultural exchange in poetry.

Four sessions are on Friday night 8:00-9:30pm with Zoom meeting:

Oct 3, 15:00-16:30 a group session on Zoom as a summary with the above poets and open mic for other translations of their works. 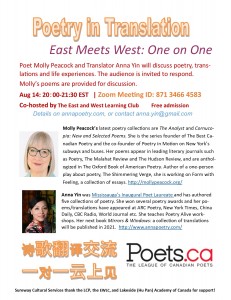 Molly Peacock’s latest poetry collections are The Analyst and Cornucopia: New and Selected Poems.  She is the series founder of The Best Canadian Poetry and the co-founder of Poetry in Motion on New York’s subways and buses.  Her poems appear in leading literary journals such as Poetry, The Malahat Review and The Hudson Review, and are anthologized in The Oxford Book of American Poetry. Author of a one-person play about poetry, The Shimmering Verge, she is working on Form with Feeling, a collection of essays. 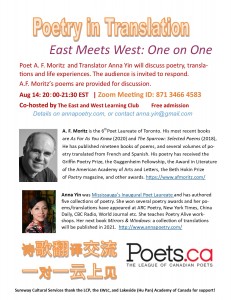 A. F. Moritz is the 6thPoet Laureate of Toronto. His most recent books are As Far As You Know (2020) and The Sparrow: Selected Poems (2018), both from House of Anansi Press. In 2015, Princeton University Press republished his 1986 volume in the Princeton Series of Contemporary Poets, The Tradition. He has published nineteen books of poems, and several volumes of poetry translated from French and Spanish. His poetry has received the Griffin Poetry Prize, the Guggenheim Fellowship, the Award in Literature of the American Academy of Arts and Letters, the Beth Hokin Prize of Poetry magazine, and other awards. 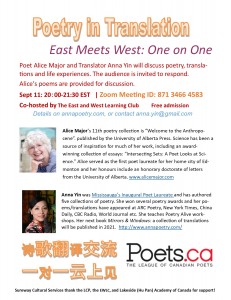 Alice Major‘s 11th poetry collection is “Welcome to the Anthropocene”. published by the University of Alberta Press. Science has been a source of inspiration for much of her work, including an award-winning collection of essays: “Intersecting Sets: A Poet Looks at Science.” Alice served as the first poet laureate for her home city of Edmonton and her honours include an honorary doctorate of letters from the University of Alberta. www.alicemajor.com 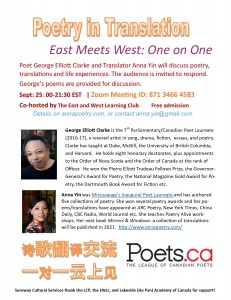 The 4th Poet Laureate of Toronto (2012-15) and the 7th Parliamentary/Canadian Poet Laureate (2016-17), George Elliott Clarke is a revered artist in song, drama, fiction, screenplay, essays, and poetry.  Born in Windsor, Nova Scotia, in 1960, Clarke was educated at the University of Waterloo, Dalhousie University, and Queen’s University.  Clarke is also a pioneering scholar of African-Canadian literature.  A professor of English at the University of Toronto, Clarke has taught at Duke, McGill, the University of British Columbia, and Harvard.  He holds eight honorary doctorates, plus appointments to the Order of Nova Scotia and the Order of Canada at the rank of Officer.  His recognitions include the Pierre Elliott Trudeau Fellows Prize, the Governor-General’s Award for Poetry, the National Magazine Gold Award for Poetry,, the Dartmouth Book Award for Fiction, the Eric Hoffer Book Award for Poetry (US), and the Dr. Martin Luther King Jr. Achievement Award.